A downloadable game for Windows and macOS

Stairs of Valhalla focuses on the genre of a third person, split screen, fighter where both players focus on defeating the other on each of the eleven stages within the world. The game style focuses on a Nordic Viking environment with its theme focused on a "there can be only one" mentality. The game features eleven levels (a.k.a. stages), 1v1 competitive multiplayer, two playable characters, one weapon, one shield, and a dynamic "ring out" combat system. Additionally the game features two playable characters and eleven levels formatted in a "V" shape floating in the sky.

During the 10th century, only war matters. The Vikings of the north became revered as the greatest of all the worlds' warriors, a people sworn to fight until the day they died. In the midst of the chaos a two factions stood above all others, the Wolf-Manes of the East and the Stag-Horns of West. In the year 1036 AD the two mighty clans clashed each led by a Viking warlord. The Viking warlords Balgruuf of the Stag-Horns and Olaf of the Wolf-Manes meet in battle. Their skills were so evenly matched at the end of the battle neither Balgruuf nor Olaf were left standing. Upon their death they were to be given their final resting place in the kingdom of Valhalla; however, the constant warring of the land leaves little room for new entry, forcing the two Viking warlords to fight each other in one last battle as they climb the stairs of Valhalla. 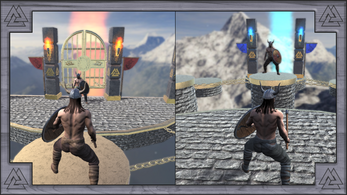 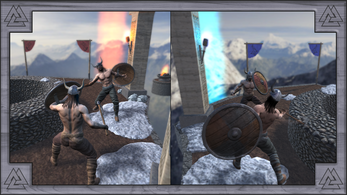 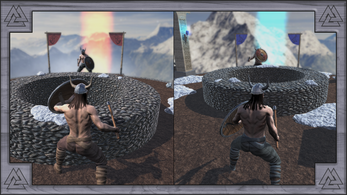